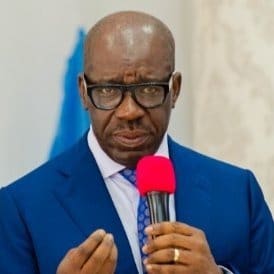 The governor of Edo state Godwin Obaseki has made it known that he has not join another platform to contest for re-election in the state.

the governor made it known through his Twitter handle that”I have not moved to a new platform yet to seek re-election. focus now is to control the spread of the coronavirus (#COVID19) pandemic, which is ravaging our country and threatening our healthcare system”.

The governor was disqualified by the APC during the primary election screening due to the mistake on his Nysc certificate.

Rumour has it that the governor has join the people democratic party (PDP) which is the rival party to the APC, after he met with President Muhammad buhari, but the governor came out to tell them he has no political party and he is only devoted in fighting the increase of the COVID19.

The governor has issue with his Godfather which has jeopardize his chance for re-running for the second time in office. The same certificate he used in becoming the present governor of the state has become a disqualifying factor for the intelligent governor.

Godwin obaseki did not believe in Godfather and he hopes to win the coming election with the help of the masses. because they can choose a leader by themselves.